The History of the Apollofirst Boutique Hotel

The four-star Apollofirst boutique hotel is housed in three imposing Apollolaan houses, in the elegant South district, close to the center and within walking distance of the Concertgebouw, the Rijksmuseum, the Stedelijk Museum and the Van Gogh. The Apollolaan is considered the most prestigious avenue in the city, with its magnificent old trees, its beautiful flower beds and its wide promenades. The construction of the first buildings on the avenue began in the early twenties of the last century.
Most of the buildings were built in the style of the Amsterdam School and were often decorated with ornaments by the famous Dutch urban sculptor, Hildo Krop, who lived from 1884 to 1970. Strolling through the neighborhood, you can also enjoy its many sculptures, as if we were in an open-air museum.

Just around the corner from the Apollolaan is the Beethovenstraat, with nice shops and good restaurants.

* The Apollofirst Boutique Hotel originated long before the start of the Second World War, in the house located at number 123, where the Gustav Joseph family installed the “Apollo House”. This was a pension primarily intended for Jewish guests of German and Austrian descent, who had fled their countries due to growing anti-Semitism.

Both the Joseph family and many of their guests were arrested by the Nazis in 1942 and transported to Auschwitz, where they were assassinated that same year. Subsequently, the building became a German-run guest house until, after the November 26, 1944 bombing of Euterpestraat Street (now called Gerrit van de Veenstraat), it was requisitioned by the German security service. After liberation, it was used as a guest house by Canadians, until the summer of 1946.

The diamond merchant Jacques Lopes Cardozo and his family lived next door at number 125. In 1942 they fled to Cuba. Subsequently, the SS Sturmbahnnführer, Willy Lages, stayed in the house until the end of the war (he was sentenced to death in 1949, a sentence that was commuted to life imprisonment in 1952).
After the war, the buildings located at numbers 123 and 125 were merged.

Later, Lilly Meijer, an actress from the silent film era and widow of film producer Leopold Meijer and owner of "Victoria Films", began to run the "Apollohuis." The story does not relate how she came to that position, but it does relate that she was of Austrian origin and that she was probably linked in some way to the Germans.
In 1964 she had the opportunity to buy both properties and the guest house was converted into a hotel that went ahead as the Hotel "Apollofirst".

After her death in 1978, the Apollofirst Hotel was acquired by Louise (Wies) Venmans. Two years later she added the third building. The hotel was renovated with great style, respecting the past and in balance with the present. At a later stage, the Apollofirst Theater, a quaint little theater with 55 seats, was born in the hotel. Famous artists enjoy performing there and visitors from around the world appreciate the varied programming.
Louise's son, Rick Venmans, once took over the hotel, while she runs the Apollofirst Theater herself.

Sincere hospitality has been, for more than 40 years, the characteristic motto of this authentic family business. 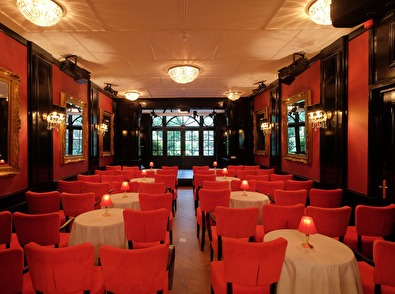 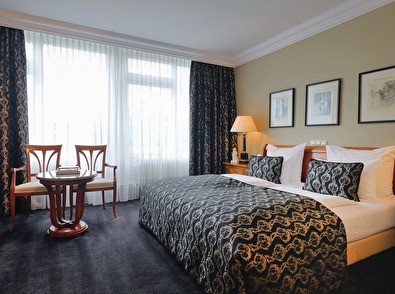 The Apollofirst Hotel is an attractive boutique hotel with 40 uniquely furnished rooms in an up-class Southern Amsterdam neighbourhood. 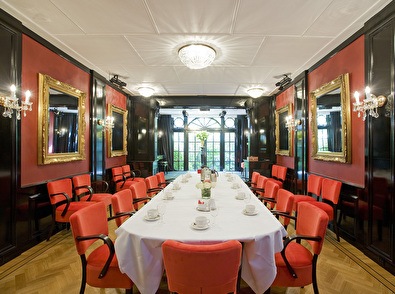 The Apollofirst Boutique Hotel is your choice for successful meetings or events at a unique location. The proximity to the City Center with on the one hand the RAI Congress Center and on the other the Zuidas (Southern Axis) district will make it work for you.